So, that was Eastercon. My [stops to count old badges on lanyard] fifth, and my favourite so far. Well-organised, good fun; a great balance of the familiar and the new; old friends and fresh acquaintances…

… and some dramatic props. [Thanks to Chad Dixon for the photo.] 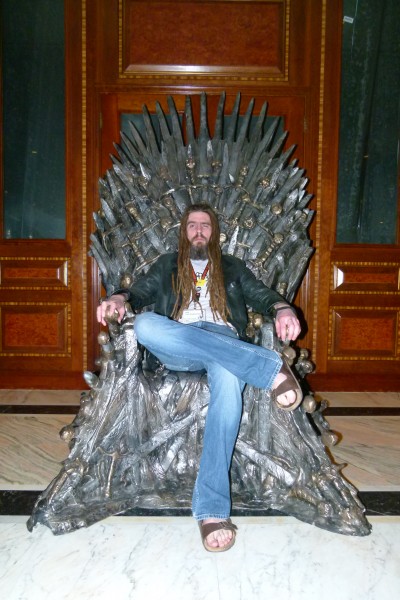 I often compare Eastercon to my experiences of Glastonbury back in my twenties: it costs me a fortune, I overindulge in my usual vices, I see less than a third of the stuff I vaguely planned to see, but yet I roll away with a warm glow that comes from sharing a highly specific chunk of space-time with a community of people who share one of the greatest passions of my life, inspired to do new things.

Granted, I’ve never left Eastercon coated in mud, wrapped in a space blanket and trying to chew my own left ear, so the analogy isn’t perfect. I’m pretty sure I never came back from Glasto carrying approximately a third of my own bodyweight in books, either. But hey, I need the exercise… and my Bruce Sterling collection draws nearer to Stage One completion[1]. 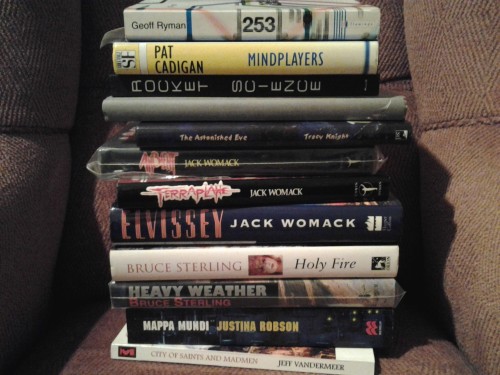 Olympus was not utterly devoid of controversy and upset, however, and I find myself wanting to talk about that. After the initial heat-of-the-moment furore, what would really have helped would have been a good solid apology and admission of error from the primary source, but… well, this ain’t one.

So, look: you can watch what actually happened right here, and whatever side you take I think that’s gotta be the absolute entry level for having an opinion on this, unless you were actually at the BSFA Awards ceremony. And here’s a record of the Twitter backchannel as it happened.

I was in the audience. Things went from cringeworthy to worse; it was the sort of thing the “trainwreck” metaphor was made for. I was sat a few seats from Lavie Tidhar at the time. That was a very uncomfortable moment for me, as a straight white male British person who just happens to be Lavie’s friend. I can’t imagine how he felt… especially given that early in the day an audience member from the Non-Anglophone SF panel had breezed up to inform him that, despite English being Lavie’s second language, he spoke it very well indeed. Condescending, much?

The common factor here is that both cases of offence were not intended to offend – quite the opposite, in fact. But that doesn’t negate the offence.

The sad thing about this, for me at least, is that Olympus felt very diverse and inclusive with respect to its roster of guests, panel topics and panel composition; a real step forward, even within the short timeframe of my own involvement with fandom. The con committee and the BSFA worked damned hard to make that happen, and as much as I believe it’s important that the failures are acknowledged, I think the good stuff needs to be remembered, too; the sheer scale of effort and passion needed to make these things happen is staggering, and to overlook that energy and commitment would be grossly unfair, no matter what may have gone wrong along the way. So, for the record, let me congratulate the BSFA and the Olypus con committee, the gophers and techs and the folk behind the scenes: I wouldn’t even know where to start, and there was oodles of great stuff over the weekend for which praise is rightly due. There’s a tendency for the baby to go the same way as the bathwater in these situations, and in terms of the grand project – making fandom a space where everyone can feel safe, valued and included, regardless of gender, nationality, skin colour, sexuality or anything else – I feel that it would help to acknowledge that, as a community, we’re “working on our shit”, as the saying goes.

But that’s my privilege speaking, and I know it. It’s easy for me to sit here and hand-wring, rehearse weak or global versions of a The Tone Argument, and recruit for the Cult Of Nice. I’m a white able-bodied just-about-heterosexual cis-male British person, and as such it’s incredibly rare that anyone gets a platform to give my culture a proper kicking, deserved or otherwise. (And hell knows it’s deserved more often than not.)

It’s never pleasurable to have worked damned hard on something, only to have someone pull out the flaws and wave them in your face. But in the context of, say, writing fiction and subbing it to editors for publication, it’s widely acknowledged that that’s how you get better. Yeah, it hurts. Emotional growth, at least in my experience, always does. If the choice is pain or stasis, though, then pain it has to be.

One final thing: I am not holding myself up as an exemplar, here. I owe what personal politicisation I’ve achieved over the last decade to fandom – to debates and discussions (yes, and slapfights) just like this one. Hell knows that I’ve said countless dumb or offensive things over the years, secure and comfortable in my ignorance and privilege, and my unwarranted opinion of myself as a pretty progressive liberal kinda guy, thankyouverymuch. You could probably trawl through the archives right here at VCTB and find enough material to throw me right into the same sin-bin as Meaney, in fact, if not even a deeper one with sharper spikes. Perhaps you could even say that my invisibility was an added layer of privilege; it’s easy to get away with being thoughtless when thoughtlessness is ubiquitous, just one more voice in the crowd.

It is not for me to stand in judgement atop the mountain of the gods.

But this is my community, too, so nor is it for me to ignore or dismiss the hurt I see expressed by others less privileged than I, especially when some of them are people I count as good friends… and there’s a significant amount of it floating around on the intertubes today. (If you’ve not seen any, then perhaps it’s time for you to go look for it.)

I honestly believe the vast majority of us want fandom to be inclusive and welcoming to everyone, even if we aren’t quite as far along with that project as we’d like to think we are. So if I could have one wish, it’s that we keep to the inclusive spirit with which Olympus was put together and executed, and listen to those who are telling us that the story we tell each other (and ourselves) about our community has flaws that still need editing out.

Redrafting sucks. But it’s the only way to make the story better.

[ 1 – Stage One completion involves acquiring one copy of all extant titles, in or out of print; Stage Two will involve trading up all titles to the best editions available, preferably signed hardback firsts. I did a lot of collecting of various things as a kid, and nowadays I realise the best way to get lasting value from assembling a collection is to delimit the set and pick a completion goal with very low likelihood; non-set-limited collections soon lose their appeal for me (because how will you ever know when you’re done?), and completion means you have to find a new thing to collect. Think of it as a sort of vice management strategy; accept the inevitability of the vice, then steer it as safely and cheaply as possible into a cul-de-sac that you think you could live in for a good long time.

Yes, this is how I think about my hobbies. No, I don’t know why. It works for me. Selah. ]