I appeared on a panel about Speculative Design at LonCon3 over the weekend just gone, and one of my fellow panellists, architect and writer Nic Clear, mentioned that he had some misgivings over the use of the word “speculative”. 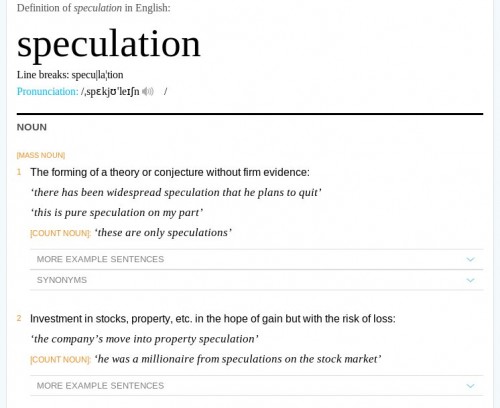 It’s always had two meanings, after all: there’s the imaginative, extrapolative and science fictional sense in which we tend to use it today, but also the rather unfashionable (read as “historically tainted”) financial sense — think speculative building, for example, or the land speculations of the railroad barons.

We don’t talk so much of people speculating on the stock exchange as we used to; nowadays, one invests in the market. The nature of the game hasn’t changed, but the label has. Here’s an Ngram chart of word frequency over time:

Now look again at the secondary definition of speculation: “in the hope of gain but with the risk of loss” — my emphasis.

An investment, meanwhile, is “[t]he action or process of investing money for profit”; the word carries connotations of safety, security and foresight, especially by comparison with the gambler’s odds of speculation. An investment carries the promise of a return, not the possibility; as Chomsky is always pointing out, costs are socialised, while profits are privatised. Perhaps not incidentally, the archaic meaning of investment was “[t]he surrounding of a place by a hostile force in order to besiege or blockade it”. Plus ça change, non?

In another conversation, possibly one that followed the Body Modification panel, someone (to my shame, I can’t remember who — convention syndrome) pointed out the way the framing of Soylent as a product shifted over time: originally posited as a quick’n’easy occasional food replacement for busy people — sorta like Slimfast or protein shakes, but without the weight-loss or buffness angles — it only started being framed as a utopian replacement for a normal diet once the vencap money started turning up.

Ethan Zuckerman, describing advertising as the internet’s original sin — itself a curiously religious metaphor — introduced me to the concept of “investor storytime” by quoting from a speech by Maciej Cegłowski:

“Investor storytime is when someone pays you to tell them how rich they’ll get when you finally put ads on your site.

Investor storytime is not exactly advertising, but it is related to advertising. Think of it as an advertising future, or perhaps the world’s most targeted ad.”  [Emphases mine.]

All selling is a game of narratives, a game of stories. To sell an idea to the vencaps, you need to tell them stories they like, stories that reflect their desires. We know the sorts of stories that the most successful vencaps like. Stories about strong ROI, certainly, but they have other interests: lax tax regimes, immortality, freedom from the restrictions of the petty mortals for whose trickle-down wellbeing they strive so hard. Capital-T Transhumanism and Singularitarianism are enthusiastically supported and bankrolled by these people.

Silicon Valley is where the two meanings of speculation collide, and Soylent is a metonymy of that collision. It figures a future where even eating is reduced to a purely economic act, a forex transaction: cash for kiloJoules. Texture’s extra, bub.

Not at all incidentally, “futures” is another word with two meanings: there are the futures of designers and writers and technologists, but then there are the futures in commodities and derivatives which are traded by HFT bots, their lightspeed speculative trades producing billions of tiny fragments of speculative profit; value without goods, signifier without signified. Marx called this “fictitious capital”. It’s a story we tell ourselves, loudly and repeatedly: a story about a world of infinite resources, a world with an infinite capacity to absorb all that we feel we have tired of, all of the dross and the waste… all of the risk.

It’s getting harder and harder to believe that story any more, despite its core fandom’s enthusiastic bankrolling of an ongoing series of ever more specious reinterpretations. Speculation births speculation. We are driven by the repercussions of financial speculation to speculate for ourselves, to dream of a different future to that offered by the neoliberal narrative.

Like all stories, it turned ugly when its tellers mistook it for truth.