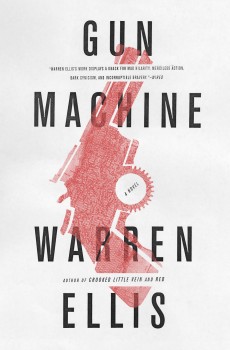 If Warren Ellis is to be believed – and why wouldn’t you believe a grumpy and grizzled man wielding a cane who looks like he eats dogs just for the fun of it, and whose legions of followers refer to him, at his command, as Internet Jesus? – the first three chapters of Crooked Little Vein were written with the intent of permanently scaring away the agent who kept hassling him to write his first prose novel.

It’s easier still to believe if you’ve actually read CLV, which is a gleefully disgusting narrative collage comprising the collected horrors of a decade spent trawling the internet’s seediest subcultural ghettoes, and introduced such delights as saline injection ballbag modification and the (hopefully at least partly fabricated) concept of godzilla bukkake to an audience who, had they done even the slightest bit of research, should have known exactly what they were in for. CLV is a short sharp slap of gross-out fun, but belongs more to a pulpy subgenre of its very own than any recognisable (or, for that matter, marketable) publishing category.

If Ellis really wanted to put off the publishers, either he or CLV‘s Bookscan figures failed spectacularly: New Year’s Day 2013 sees the release of Gun Machine, his second novel, and it’s a very different animal indeed. Oh, it’s pure Ellis, don’t worry about that – but it’s also much more recognisably a novel, and a pretty damned decent one as well. Talk of “that difficult second [album / book / cloned mutant love-servant]” all you want, but Gun Machine is a serious bit of game-raising, an order of magnitude deeper, wider and just plain better than what went before it.

I can’t really speak to Gun Machine‘s credentials as a ‘proper’ crime novel, because that’s a genre I only know at one or more removes. One could probably make an argument for Gun Machine as sf, as it’s set in one of those Gibsonian very-near-futures: recognisably not too far from the here-and-now, but with a few all too plausible technological extrapolations. But given sf’s ongoing generic toxicity to anyone who doesn’t already identify as an sf reader, I’d not bother; no one who keeps an eye on even just the topmost jags of the technology news-berg is going to get sunk by this novel. So let’s call it a psychogeographical psycho-thriller; there are so many damned genres around now, another one won’t hurt. (And I like psychogeography, so there.)

So, yeah: John Tallow is a detective with the NYPD, and in the opening chapters he sees the brain matter of his partner spattered across a tenement stairwell (and his suit jacket) courtesy of a naked man with a shotgun who’s working his way through a psychotic break. Pretty standard start for a crime novel, right? But in pretty short order – and in brief and highly visual chapters – Tallow discovers the tenement contains an apartment full of guns. Hundreds of the things, and not just stashed away in a cubby-hole, either; they’re laid out on the floor and walls in an intricate, cryptic and, worst of all, incomplete gunmetal mandala.

It’s the sort of clusterfuck case that no sane detective would ever want to be saddled with, let alone one trying to deal with having seen his partner zeroed right in front of him earlier that day… which is exactly why Tallow’s boss dumps it straight into his lap, hoping it’ll sink quickly into the ocean of unsolved Noo Yoik murder cases and take Tallow with it. And that’s before the forensics evidence starts flooding in, revealing that each of the guns is connected to an unsolved murder, a collection of cold cases stretching back decades.

This is no straight-forward serial killer caper, though, and technique is a part of that. Instead of sticking to Tallow as he – assisted by the two profoundly (and, quite often, amusingly) dysfunctional CSU sidekicks he acquires – collects plot tokens to trade in for the final revelation, Ellis gives us chapters from the killer’s POV as well. This takes deft handling; revealing the killer to the reader early on robs a crime writer of a major source of tension, but the plot here is far wider than one man and his very serious case of psychopathy, which lets Ellis pull us into both the deep and recent histories of New York as a city of trade, uncovering webs of deceit, greed and and corruption as contemporary as they are timeless. And somehow, despite Tallow being almost a textbook cipher of a detective, a man with no life beyond the job he’s been indifferent to for years and his apartment piled full of pre-digital media, Ellis makes you root for the guy; it started out as pity, but became something more than that, at least for me.

Perhaps it’s a matter of contrast: the hollow Tallow against the vision-filled and profoundly schizophrenic killer, against his madcap sidekicks, against the callow careerists of the NYPD. Character depth isn’t Gun Machine‘s strong point – it’s very much a novel of types – but Ellis has the knack of communicating what, for want of a better term, we might call the universality of fucked-upness. Despite the comic excess, Ellis’s white-hats are big-hearted behind their overamped peccadilloes; it’s the black-hats who wear the sharp suits, the veneers of respectability and conformity. Ellis knows his audience of freaks and outcasts. He’s always been proud to be one of them, after all.

And there are some genuinely funny moments in Gun Machine, a necessary and welcome counterbalance to the clinically gruesome descriptions of slaughter. It’s dark humour, of course, but delivered with a humanity that you might not expect after reading CLV… though if you’ve read Transmetropolitan, arguably the comic that made his rep, you’ll know that Ellis has a big heart hidden somewhere behind that scouring-pad beard, and that his spiky character is a sort of defence mechanism against a world that can stomp on hearts all too easily.

(Having written that publicly, of course, I fully suspect Ellis will now despatch a drug-crazed fan-minion to shit in my eyesockets while I sleep. Man’s gotta rep to protect, y’know.)

But enough detail. Gun Machine isn’t going to take any literary prizes, but it’ll take you on a blood-soaked ride around the scabrous underbelly of a world we still think of as modern, but which is really a whole lot older and simpler – and nastier – than we care to acknowledge. And while there’s no happy-ever-after – or even just desserts – in Ellis’s world, it is all the more human for that; it rings with the bittersweet chime of the truth, and that’s a sound I don’t hear enough, no matter the medium.