This book is basically a condensation of all Easterling’s work preceding it – which isn’t entirely surprising, but worth noting nonetheless. In the context of the task at hand at time of taking these notes, the main point to be made is that the “smart city” is basically just a rebadging of what Easterling identifies as “the zone” (note that her list of examples are all cities which have been described as being “smart”: KAEC in Saudi, Songdo, Cyberjaya, HITEC Hyderabad – p. 15); this means that we can get away from the notion that “smartness” is anything to do with any specific technology or policy (or suite thereof), and think of it instead as an iteration of the “spatial softwares” designed to produce a space in which extrastatectraft might be performed. In this way, we can see data as both the means and the end of control: urban space as an economic and ideological Taylorist panopticon.

The shared standards and ideas that control everything from technical objects to management styles also constitute an infrastructure. Far from hidden, infrastructure is now the overt point contact and access between us all – the rules governing the space of everyday life.

(p. 11; note that Easterling kinda undermines that “far from hidden” point later, modifying it to something closer to “hidden in plain sight” – its ubiquity makes it invisible, in other words. This is a continuation of Easterling’s multi-book riff on “spatial products”, which is a dominant feature of her magisterial Enduring Innocence (2005), but which in turn has its origins in Organisation Space (1999), both from MIT Press.)

Now not only buildings and business parks but also entire world cities are constructed according to a formula – and infrastructural technology […] Manifest in these stock specifications, infrastructure is then not the urban substructure but the urban structure itself – the very parameters of global urbanism.

(p. 12; “technology” being used here in the broader original sense of practices, rather than the more recent false specificity of devices)

Infrastructure space has become a medium of information. The information resides in invisible, powerful activities that determine how objects and content are organised and circulated. Infrastructure space, with the power and currency of software, is an operating system for shaping the city.

[Riffing on McLuhan’s “the medium is the message”, and his observation that content is mere meat to distract “the watchdog of the mind”]: … the activity of the medium or infrastructural matrix – what it is doing rather than what it is saying – is sometimes difficult to detect.

(p. 13; triumph of surface over substance, marketing rhetorics, the prestidigitation of infrastructural magic – the latter being a riff from a talk I gave in Munich back in 2017, the video of which I’m trying to get the conference organisers to reinstate to Y*ut*be)

… dynamic systems of space, information, and power generate de facto forms of polity faster than even quasi-official forms of governance can legislate them […] As a site of multiple, overlapping, or nested forms of sovereignty, where domestic and transnational jurisdictions collide, infrastructure space becomes a medium of what might be called extrastatecraft – a portmanteau describing the often undisclosed activities outside of, in addition to, and sometimes in partnership with statecraft.

Both urban space and telecommunications are technologies and mediums of information.

[ISO9000] promotes the ritualised incantations of something called “quality” […] management guidelines for a process or quality system that addresses everything from the environment to government itself […] that often resembles the hilarious, upbeat argot of self-help gurus. [It is] a perfect conduit of undeclared activities and intentions with potentially dangerous consequences.

(p. 19; consequences come from the “pre-cleared” status of anyone who has hustled their way to being accredited by ISO, after which point they’re assumed to be the proverbial safe pair of hands; bonus points for the scare-quoting of “quality”, which is one of the great enduring suitcase words, as poignantly illustrated by Pirsig’s Zen & the Art of Motorcycle Maintenance)

Political and economic data come cloaked in the rationality of science even though they may really present false logics or systems of belief.

(p. 20; against econometrics, and Easterling’s signature bugbear, the McKinsey consultant – a loathing which makes more sense as the years pass by)

Disposition is the character or propensity of an organisation that results from all its activity. It is the medium, not the message […] It is not the shape of the game piece but the way the game piece plays. It is not the text but the constantly updating software that manages the text. Npt the object form, but the active form […] Detecting and developing the active forms that shape disposition is an essential skill of the urbanist in infrastructure space…

Examining the power of the stories, persuasions, or ideologies that accompany a technology also helps in detecting disposition […] Well-rehearsed theories, like those related to Capital or neoliberalism continue to send us to the same places to search for dangers while other concentrations of authoritarian power escape scrutiny […] shaping and managing the story is then also a crucial skill in infrastructure space.

(pp. 21-2; note that the skill with story that Easterling describes here is already well developed in the organisations that peddle the spatial products with which she is concerned; e.g. McKinsey give great story, and therein lies the problem, in that we have to learn to subvert and rewrite those stories)

… typically as designers, and in broader culture, we’re looking for the right answer. As designers we’re still very solutionist in our thinking; just like righteous activism that pretends to have the right answer, dispositionally, this may be a mistake. The chemistry of this kind of solutionist approach produces its own problems. It is very fragile. The idea of producing a ‘master plan’ doesn’t have a temporal dimension, and is not a sturdy form.

Having the right answer in our current political climate only exacerbates the violence of binary oppositions. Our sense of being right escalates this tension. I’ve been trying to think instead of forms which have another temporal dimension that allow for reactivity and a branching set of options—something like a rewiring of urban space. They aren’t vague – they’re extremely explicit – but they allow for responses to a set of changing conditions.

Regardless of spectacularly intelligent arguments, the bending of narratives towards ultimate, teleological ends – and the shape and disposition of these arguments – doesn’t work for me. Dispositionally or structurally it seems slightly retrograde.

There are many forms of violence, and it almost seems weak to train your gun on one form of it. There isn’t one singular way in which power and authority concentrate, and there’s not one giant enemy. Such thinking leaves you open to a more dangerous situation.

Keller Easterling interview at Failed Architecture, riffing on her latest book, Medium Design (which is apparently only available in print if you get a copy mailed from Moscow). Easterling is among the brightest of lodestars in my personal  theoretical pantheon; her Enduring Innocence not only rewired how I thought about space, but also rewired my conception of how an academic text could be written.

I can finally fully announce some very agreeable publications news: my story “Los Piratas del Mar de Plastico” appears in this year’s Twelve Tomorrows, which is MIT Technology Review‘s annual all-fiction special. (On Stateside newsstands in August, I believe — though I know next to nothing about UK/Europe/global availability. You can sign up on that page to be alerted when copies go on sale, though.) 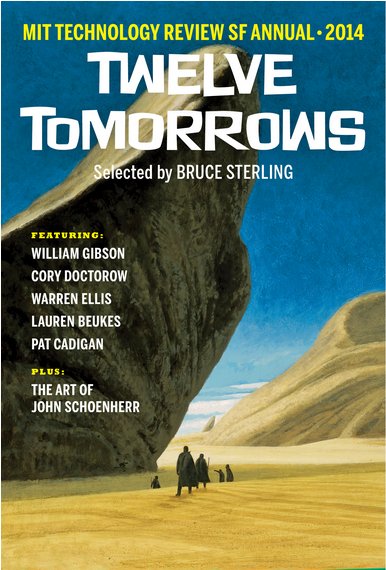 It’s an astonishing list of names to see myself alongside, and no mistake: Bruce Sterling (who took the editorial chair, and shoulders any blame for inviting yours truly to play alongside the grown-ups), William Gibson, Lauren Beukes, Pat Cadigan, Chris Brown (no, not that Chris Brown), Cory Doctorow, Warren Ellis. Receiving the invitation to contribute prompted the most intense burst of Imposter Syndrome I think I’ve ever had; it’s still not quite faded away, either.

Like most of my writing (yeah, yeah, I know), “Los Piratas… ” is not amenable to easy “what’s it about?” summary; that said, if you’ve read Keller Easterling’s Enduring Innocence, you’ll understand the choice of location (and the title ). As usual, I ended up trying to cram a novel’s worth of plot and ideas into a short story, and I’d have loved to have let it stretch out to novella length by expanding the aftermath section, which is necessarily summarised in broad strokes. But it was always intended as something of a polemic, and sometimes literary concerns have to take the back-seat when you’ve got a particular something to say to a particular audience. All that remains is to see how the audience reacts, I guess…

At the moment, it looks like I’ll be haunting the ExCel Centre (and, presumably, other significantly less monstrous venues in the same locale) in London from early afternoon Friday 15th August until the afternoon of Monday 18th. I’m on a handful of panels and giving a paper on the academic track, so if you want to come heckle a cyberhippy, these are the dates your diary needs:

“From piercings and tattoos to laser eye surgery, we now have a world where decorative or voluntary medical body modifications are common. Modifications that add to our capabilities are starting eg. magnets implanted in fingers provide a magnetic sense. What more is coming? Zoom lenses for eyes? Enhanced muscles? Who is going to be the first with these and why, and will anybody want to install Microsoft Windows for brains?”

[Justina Robson (M), Paul Graham Raven, Jude Roberts, Frauke Uhlenbruch; no prizes for guessing how I ended up on this one]

“In 1964, Asimov wrote a set of predictions for the 2014 World’s Fair. What did he predict, what did he get right and wrong, what did he say that was useful, and what did he miss completely?”

“Three academics each give a 15 minute presentation. This is followed by a jointly held 30 minute discussion with the audience.”

“Assuming a new technology, like synthetic biology, works, what products might come out of it? Speculative design is both a new artistic approach and a way of looking at problems and issues in a different way.”

[Gary Ehrlich (M), Nic Clear, Scott Lefton, Paul Graham Raven, Sarah Demb; these are mostly new names for me, so I’m hoping to learn new things on this one.]

I’m sure I’ll attend a fair few other panels and things, too, but mostly I’m planning to keep my schedule open and flexible; I’ve done enough cons now to know how best to make them work for me, and it turns out that running around with a timetable isn’t it. Very much looking forward to this rare opportunity to see some long-term Stateside friends and colleagues in the flesh; if you’re one of them (or, indeed, one of anyone), do drop me a line so we can arrange to meet.

Otherwise, the best way to locate me on the fly will probably involve triangulating between Twitter, the bar, and the smoking area. See you there? Good.