Real people don’t have character arcs, or simple motivations, or background stories to be revealed in a prequel – those things are inventions of the entertainment industry. They’re marketable tropes. Real people are far more nebulous, complicated, they live far more in the moment and without definable meaning. They can’t be summed up on a character sheet. As such it feels dishonest — for me at least — to try and write characters that way. Instead I feel more comfortable providing the reader with glimpses into their lives, allowing them to tag along with them in their day to day routines, to let them piece things together and make their own decisions about them. That’s how we interact with most people we meet, if we’re honest: we never really, deeply know that much about them, we can just observe and judge, rightly or wrongly. It’s the best we can ask or hope for, beyond close friends or lovers. We’re not entitled to anything more. I quite like the idea of the same being true about the characters in my books. But maybe I’ll change my mind.

If you’ve not read Infinite Detail yet, sort your shit out. It’s enviably good. Also bleak as hell, but — well, see the title of this post.

This one’s a doozy; does exactly what it says on the tin, on the basis of a deep and comparative dive into “smart city” documentation from IBM and Cisco. A useful extension of Jasanoff & Kim’s “sociotechnical imaginary” concept into the corporate mythmaking space, too.

… these documents [from IBM and Cisco] comprise a narrative according to which the smart city appears inevitable, the only reasonable response to an impending urban crisis. At the same time, since the smart city as an “actually existing” sociotechnical assemblage is still nascent, we argue that the smart city is an anticipatory vision—even a self-fulfilling prophecy. It is a set of orienting assumptions and operationalizable propositions about urban planning and development.

… the smart city is a field of struggle over the political imagination. We should think of these corporate discourses as tools for directing and delimiting what we can imagine as possible. As this paper shows, IBM and Cisco do not set out a suite of scenarios that represent radically different visions and politics. There are variations of the services they offer, but rarely do they deviate from reflecting and reinforcing the technocratic and neoliberal precepts that motivate this vision of smart urbanism [… their] aim is to establish their version of smartness as the future—the only one available or possible.

By seeking to dominate the discursive field and capture the imagination of city leaders, IBM and Cisco aim to ensure that alternative smart city imaginaries remain effectively closed off. It follows that if we are to open the space for alternatives and counter-imaginaries, then we first need to understand the principles and attributes of the dominant imaginary as a way of better knowing what needs to be challenged and how.

Given this overall crisis-based framing, we can read the smart city as a reactionary story, and not only the ultimate manifestation of techno-utopian thought. To be sure, those utopian elements are still present, especially in the dreamscapes of smart cities that are built from scratch on empty plots, networked and sensored from the outset. Yet, when we consider the smart city as a piecemeal project of securing against an impending catastrophic future, it begins to take shape as a conservative project in which the best course of action is to pragmatically maintain stability and to technically control uncertainty…

For tech corporations and city leaders, the sociotechnical imaginary of smart urbanism promises control over myriad urban dynamics and then outlines ways to make that dream come true [… ] the city ceases to be a messy, unknowable, and uncontrollable place. Urban elites can imagine themselves possessing a panoptical power…

It is important to recognize that the language of “solutions”—like that of “smartness”—is more than just an idle label. [refs out to Bogost and Morozov re “solutionsim”; cf. also James Bridle’s “computational thinking”] By recasting everything as a problem waiting for a techno-fix, especially issues that are social in nature, the space for philosophical reflection and political contention shrinks. Furthermore, in effect, the solutionist language works backward: for those in the business of providing solutions, solvable problems are essential. The crises are tailored to justify the solutions, and the latter come in different forms and guises.

By far, the most common “actually existing” smart cities are those that are retrofitted and renovated with upgrades that transition them from “dumb” to “smart.” This usually starts with one or a few initiatives meant to address a specific problem, such as parking or public safety.

Then, there is the “shock therapy” method of implementation—or what we call smart shock—in which a city undergoes a quick, large-scale integration of smart urbanism ideals, technologies, and policies into an existing landscape. In these cases, the smart city transition happens to a greater degree and over a short time period. Smart shocks are much rarer than retrofits because they require much more financial and political capital. [e.g. Rio de Janeiro]

Perhaps the most idealistic models for the smart city are built-from-scratch projects that are being constructed where nothing existed before. A canonical case is New Songdo in South Korea […] These model cities are more like showcases for the technology’s potential: why just tell customers about the smart city with a pamphlet, when you can show them the imaginary in tangible form?

The smart city is a dynamic future-in-the-making. It is an exemplary case of how corporations, not just state actors, actively construct sociotechnical imaginaries to advance their own ends. While it is true that the corporate model is an offshoot of a deeply rooted political economic regime, we must not mistake a contingency for inevitability, despite IBM and Cisco’s efforts. In this vein, reframing and reimagining smart urbanism must involve creating counter-narratives that open up space for alternative values, designs, and models…

Patterns other than the wave, though, are everywhere. Here are the ones Stevens calls “nature’s darlings.” Spiral: think of a fiddlehead fern, whirlpool, hurricane, horns twisting from a ram’s head, or a chambered nautilus. Meander: picture a river curving and kinking, a snake in motion, a snail’s silver trail, or the path left by a goat grazing the tenderest greens. Radial or explosion: a splash of dripping water, petals growing from a daisy’s heart, light radiating from the sun, the ring left around a tick bite. Branching and other fractal patterns: self-replication at different scale made by trees, coastlines, clouds. Cellular or network patterns: repeating shapes you see in a honeycomb, foam of bubbles, cracked lakebed, or light rippling in a pool; these can look like cells or, inversely, like a net.

These fundamental patterns inform our bodies, too. We have wiggling meanders in our hair, brains, and intestines; branching patterns in capillaries, neurons, and lungs; explosive patterns in areolae and irises; spirals in ears, fingertips, DNA, fists. Our brains want patterns. We follow them instinctively: coiling a garden hose, stacking boxes, creating a wavering path when walking along the shore. And we even invoke these patterns to describe motions in our minds: someone spirals into despair or compartmentalizes emotions, thoughts meander, rage can be so great we feel we’ll explode. There are, in other words, recurring ways that we order and make things. Those natural patterns have inspired visual artists and architects for centuries. Why wouldn’t they form our narratives, too?

Jane Alison at the Paris Review 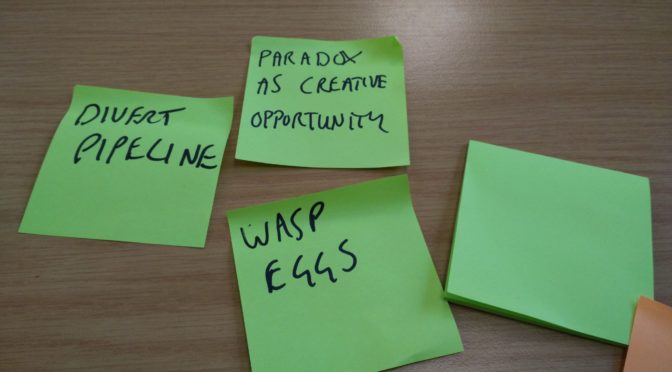 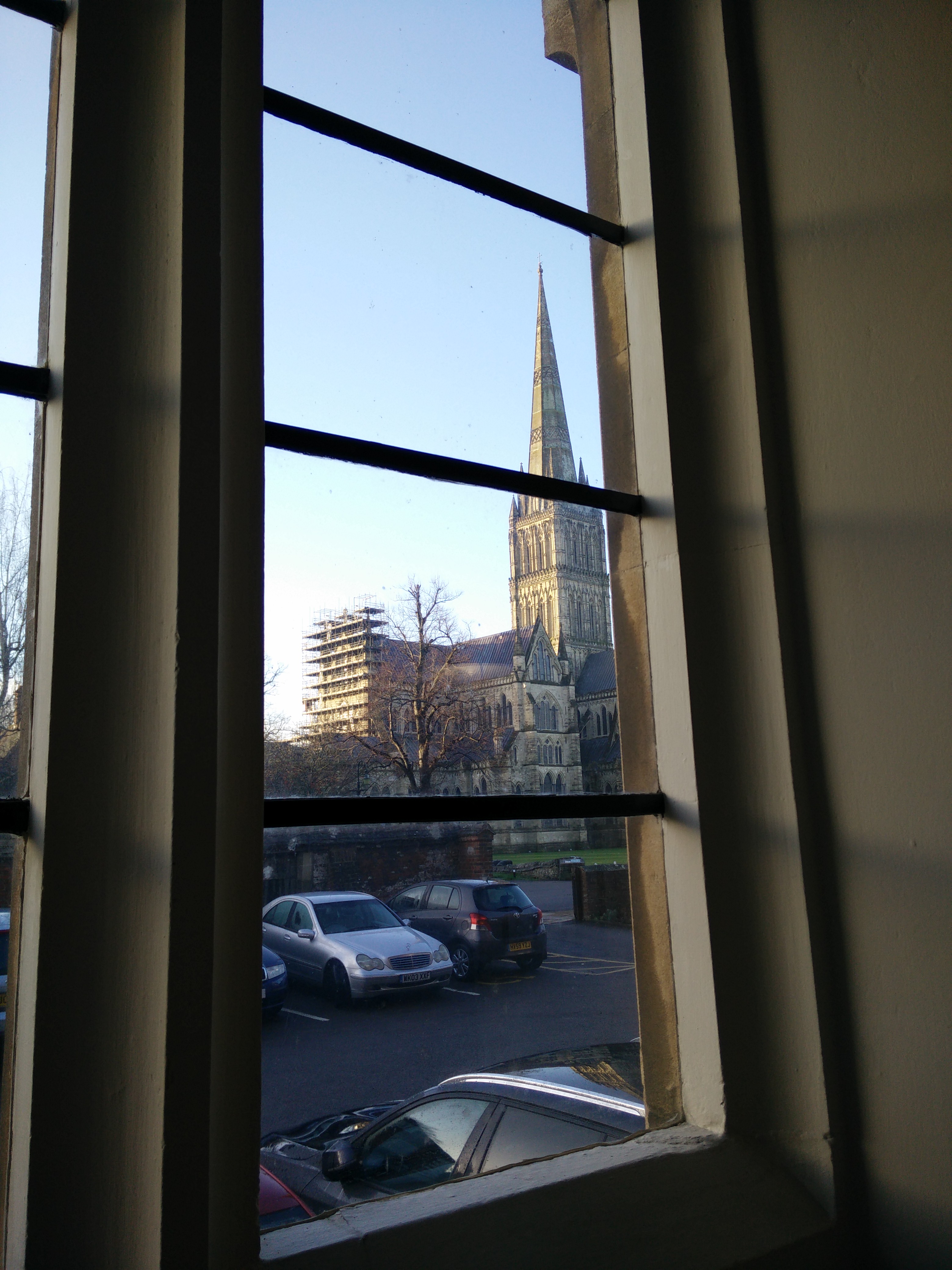 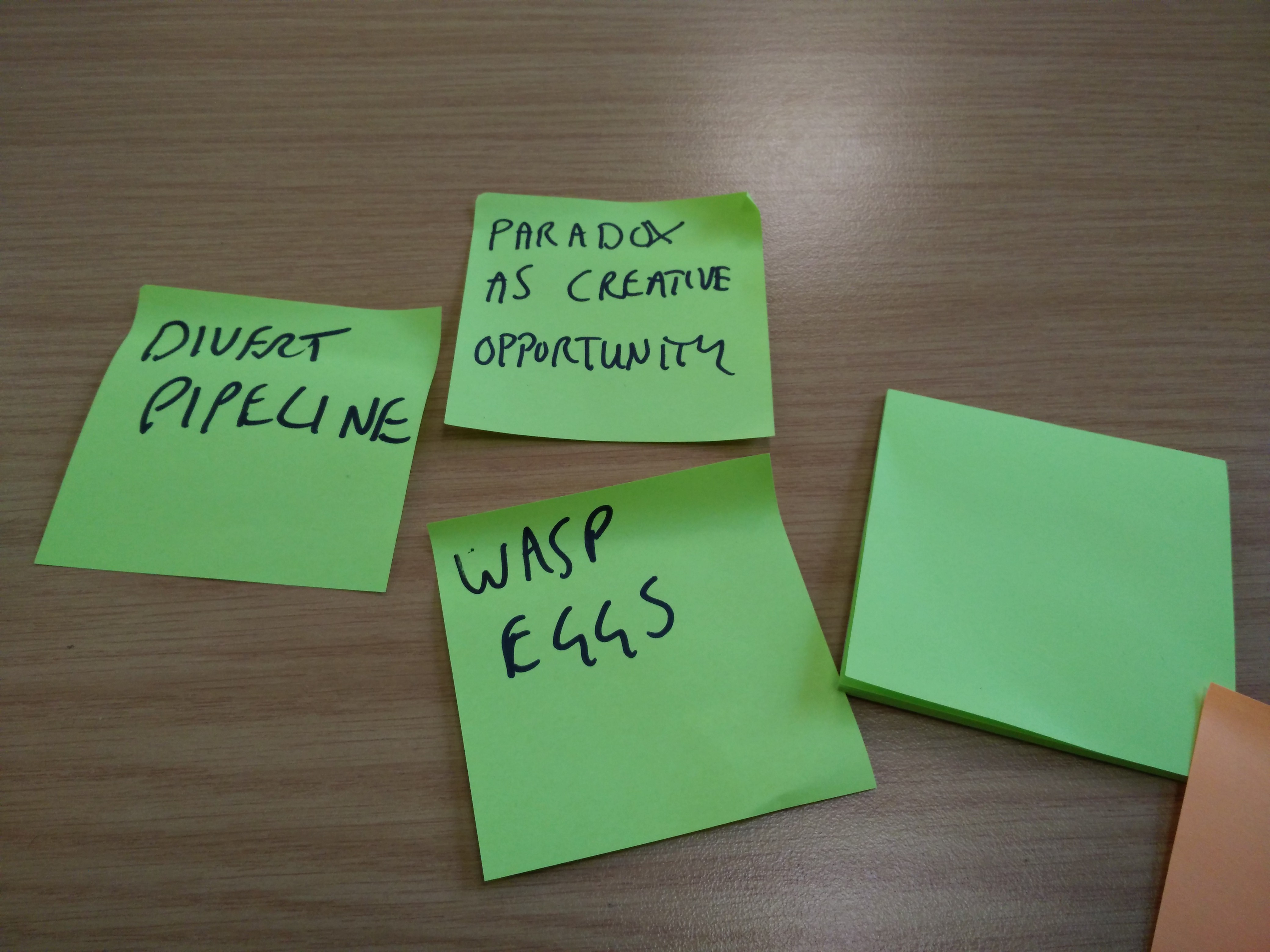 Fast times at Sarum College, Salisbury. Thanks to DSTL for hosting.

“The work is never finished. The work will never be finished. There will never be a nice, comfortable utopia where we can rest on our laurels and sip strawberry daiquiris by the pool and trust that now things are Fine and we can all relax. Utopia is not a stable system. It doesn’t last. The best we can hope for is five minutes, an hour.”