Good, passionate arguments here from my friend Dobraszczyk, making a case for future urban imaginaries as a necessary component of our collective coping with an uncertain future. Note his explicit disavowal of the predictive mode, and the arguments in favour of the imagination as not only (ultimately, eventually) productive of more realistically liveable cities, but also as a kind of ideological prophylactic against totalitarian ideologies. (Thus we might see Paul’s proposals here as a defence mechanism to be deployed against the totalising and black-boxing corporate narratives of “smartness” described in Sadowski & Bendor, 2019.)

Cities are always a meld of matter and mind, places that we are rooted in both physically and mentally […] rather than cleave the imagination from reason, should we not explore how the two are entangled – how together they can open up rich possibilities in terms of how we think the future?

Here Dobraszczyk realises what has become a familiar truism of science fiction criticism: “Images of the future [as in science-fictional cities], no matter how fantastical they may be, are really about the present” (p. 8); I’d go further, and argue that the more fantastical the vision, the closer to the zeitgeist are the deep truths contained within.

… we now experience London as a product of Dickens’s texts [thanks to many years of Dickensian tourism opportunities… a] similar transference of imagined to real is now happening in the Blade Runner tours currently being offered to tourists in Shanghai.

Against the hoarding render and the maquette: “Architectural visualization – especially in the digital age – relies upon images as tools of persuasion that effectively present something that is essentially a speculation, a fiction” (p. 10); Dobraszczyk notes that there’s often an absence of affect or feeling in these images, as they attempt to paper over “the gap between fantasy and reality”, but that absence “alerts us to the difference between fiction and fact, between the world as we find it and the world as we wish it to be.” (p. 11)

Noting the way in which the Burj Khalifa echoes an old Frank Lloyd Wright proposal for Chicago from the grand era of USian skyscrapers: “Past precedents will always be important because they almost always form the basis for more recent urban plans, no matter how unprecedented they may seem” (p. 11); see also, IMO, the way in which the “smart city” with driverless cars recapitulates the classic Futurama exhibit, in function if not in aesthetic.

“We must recognise that the imagination is key in how we ‘pre-experience’ alternative futures – how we can prepare ourselves for what might be coming. [These efforts] will not be primarily predictive – believable outcomes based on what we know already – but rather a range of stories that allow us to feel what it might be like to live in the future.”

“… humans need narrative to make sense of a whole range of possible outcomes that can never be predicted with any degree of certainty”; here, Dobraszczyk is advocating a “story-based approach to imagining the future [which] encompasses the metaphorical, the ethical, the aesthetic and the speculative.”

Linking out to Latour, A-NT and flat-ontology positions more broadly, in the context of ecological crisis: “In thinking of buildings and cities as primarily about connections, we can open our minds to an almost infinite array of possibile futures for them – futures that will be defined by how we connect up all manner of things […] such futures can never be predictive, but they can empower us because they will release us out into worlds beyond ourselves.” (p. 15) That last phrase being perhaps the most concisely poetic argument in favour of object-oriented thinking I’ve encountered in quite some time.

Finally, an argument for the imagination amid the shared contexts of fictions and imaginaries as capable of fostering a radical resilience beyond the banal socioeconomic and/or post-disaster “bounce-backability” that the term tends to devolve to in planning discourses: a shared narrative of futurity, even when contested, “forges a link between how we imagine the future city and how we relate to it as a real place”; promoting and defending an “ecology of the human mind”, which is “vital in resisting the tendency of contemporary capitalism – or any dominating worldview – to constrain the human imagination […] imagination is already politicised because, as a faculty that only flourishes when set free, it inherently resists such subjugation”; the result is a radical conception of urban resilience that extends to a sort of plural political collectivity, akin to an ideological immunisation against totalitarian/authoritarian visions. The shared notion of the very possibility of possibility acts against its pre-emptive foreclosure by fascism, sort of thing… though I should probably note that Dobraszczyk doesn’t actually drop the f-bomb himself, here. 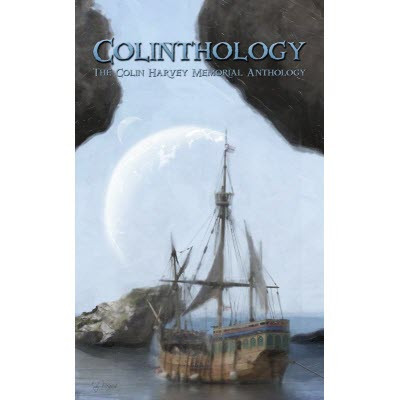 Here is an ebook you might consider purchasing. The Colinthology is an anthology of stories collated by Roz Clarke and Joanne Hall in celebration and memorial of Colin Harvey, a novelist late of the Bristolian SFF parish, and one of my clients from my webdev days.

If the reasons above aren’t sufficient, then I doubt this one will make much difference, but nonetheless:

“Biz be Biz” takes place in the (currently mothballed) New Southsea universe I was still playing around with at the time, and grew out of one of my Friday Flash Fictions. It was a lot of fun to write; I talked about the process (which ended up as a sort of brinksmanship tennis match, in the best possible way) on a panel about collaborative creation at Bristolcon this weekend just gone, and hopefully the audio will crop up online somewhere at some point, should you be curious to know more. (It was, by all accounts, a fairly interesting panel; I certainly learned a thing or two.)

I was asked to write a few words about Colin for the book, which I think would be suitable for sharing here:

I only met Colin two or three times in meatspace. He was a client in my webdev days, so we chatted via email — but email is no intimate medium, and we mostly spoke of business.

Colin at conventions was different thing; there, the easy-going character familiar from his emails was overlaid with a garrulous, generous bonhomie. The sort of chap who, on seeing you passing, would not merely nod but actively drag you right in to whatever conversation he was involved in; an extrovert, for sure (or so he seemed to me), perhaps with a well-leashed hint of Jack the Lad lurking behind the grown-up façade, but the sort of extrovert whose happiness seemed to derive in significant part from the happiness of those around him. A fun guy to be around, in other words — though tiring, unless you could match his herculean tolerance for alcohol in the early hours of the morning.

There’s a third Colin, too — the one I wish I’d got to know better, the Colin who blogged about rescuing injured baby blackbirds. I only caught the last fifteen minutes of his movie, so to speak; I never got to see the full range of his character, the depths and subtleties.

But you can tell a lot about a character from their final scene, can’t you? And that the writers and readers that knew him have come together to honour his memory with an anthology says, I think, a lot about a guy whose honesty and drive had a knack of making things happen — for himself, yes, but also for others.

He’s still doing it now, as you can see.

A good sort, in other words. The Bristol scene feels Colin’s loss very keenly, and the anthology is a testament to that. I’m very pleased to have my work in there.

Other miscellaneous updatery: I move house this Friday! I haven’t properly started packing yet! I have deadlines dropping on me like bat guano on a spelunker’s hard-hat! Everything’s going a bit mental! Nothing seems quite real! But yet I’m still oddly excited!

More on this before the move. Or, if I manage to manage my displacement activities appropriately, after the move. One or the other. Ahem. Yes.