This one’s a doozy; does exactly what it says on the tin, on the basis of a deep and comparative dive into “smart city” documentation from IBM and Cisco. A useful extension of Jasanoff & Kim’s “sociotechnical imaginary” concept into the corporate mythmaking space, too.

… these documents [from IBM and Cisco] comprise a narrative according to which the smart city appears inevitable, the only reasonable response to an impending urban crisis. At the same time, since the smart city as an “actually existing” sociotechnical assemblage is still nascent, we argue that the smart city is an anticipatory vision—even a self-fulfilling prophecy. It is a set of orienting assumptions and operationalizable propositions about urban planning and development.

… the smart city is a field of struggle over the political imagination. We should think of these corporate discourses as tools for directing and delimiting what we can imagine as possible. As this paper shows, IBM and Cisco do not set out a suite of scenarios that represent radically different visions and politics. There are variations of the services they offer, but rarely do they deviate from reflecting and reinforcing the technocratic and neoliberal precepts that motivate this vision of smart urbanism [… their] aim is to establish their version of smartness as the future—the only one available or possible.

By seeking to dominate the discursive field and capture the imagination of city leaders, IBM and Cisco aim to ensure that alternative smart city imaginaries remain effectively closed off. It follows that if we are to open the space for alternatives and counter-imaginaries, then we first need to understand the principles and attributes of the dominant imaginary as a way of better knowing what needs to be challenged and how.

Given this overall crisis-based framing, we can read the smart city as a reactionary story, and not only the ultimate manifestation of techno-utopian thought. To be sure, those utopian elements are still present, especially in the dreamscapes of smart cities that are built from scratch on empty plots, networked and sensored from the outset. Yet, when we consider the smart city as a piecemeal project of securing against an impending catastrophic future, it begins to take shape as a conservative project in which the best course of action is to pragmatically maintain stability and to technically control uncertainty…

For tech corporations and city leaders, the sociotechnical imaginary of smart urbanism promises control over myriad urban dynamics and then outlines ways to make that dream come true [… ] the city ceases to be a messy, unknowable, and uncontrollable place. Urban elites can imagine themselves possessing a panoptical power…

It is important to recognize that the language of “solutions”—like that of “smartness”—is more than just an idle label. [refs out to Bogost and Morozov re “solutionsim”; cf. also James Bridle’s “computational thinking”] By recasting everything as a problem waiting for a techno-fix, especially issues that are social in nature, the space for philosophical reflection and political contention shrinks. Furthermore, in effect, the solutionist language works backward: for those in the business of providing solutions, solvable problems are essential. The crises are tailored to justify the solutions, and the latter come in different forms and guises.

By far, the most common “actually existing” smart cities are those that are retrofitted and renovated with upgrades that transition them from “dumb” to “smart.” This usually starts with one or a few initiatives meant to address a specific problem, such as parking or public safety.

Then, there is the “shock therapy” method of implementation—or what we call smart shock—in which a city undergoes a quick, large-scale integration of smart urbanism ideals, technologies, and policies into an existing landscape. In these cases, the smart city transition happens to a greater degree and over a short time period. Smart shocks are much rarer than retrofits because they require much more financial and political capital. [e.g. Rio de Janeiro]

Perhaps the most idealistic models for the smart city are built-from-scratch projects that are being constructed where nothing existed before. A canonical case is New Songdo in South Korea […] These model cities are more like showcases for the technology’s potential: why just tell customers about the smart city with a pamphlet, when you can show them the imaginary in tangible form?

The smart city is a dynamic future-in-the-making. It is an exemplary case of how corporations, not just state actors, actively construct sociotechnical imaginaries to advance their own ends. While it is true that the corporate model is an offshoot of a deeply rooted political economic regime, we must not mistake a contingency for inevitability, despite IBM and Cisco’s efforts. In this vein, reframing and reimagining smart urbanism must involve creating counter-narratives that open up space for alternative values, designs, and models… 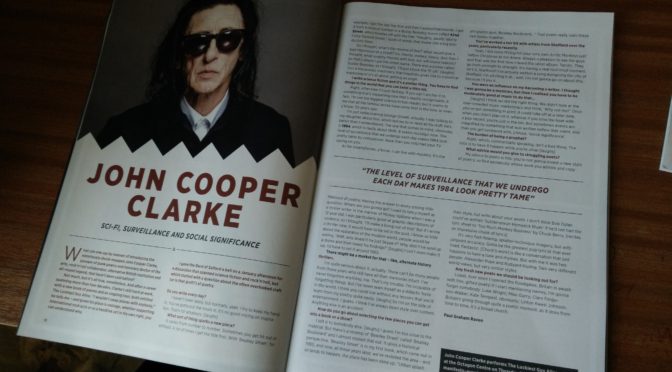 The feature interview in this month’s issue of Now Then Magazine is the result of yours truly having a chat with the bard of Salford himself, Dr John Cooper Clarke.

Residents of Rust City can pick up a pulped-wood copy from all the usual places, while those elsewhere can peruse it in electronic form via the website. Many thanks to Dr Clarke and his publicity people for setting up the interview, and for the two Sams at Now Then for letting me talk to a legend.

“Networks weird people.” Quinn Norton and Ella Saitta explain the yin-yang nature of network effects — and the complicity of hackers and “geek culture” in such — to the Chaos Communications Conference.

This is of considerable interest to me, for two reasons. First of all, because legibility is a big part of what my doctorate is about: the systems on which we depend are illegible to us, and in the same way that the state needs to “see” its citizens to interact with them effectively, we need to “see” our infrastructure; however, this would be counterproductive for those who own and control infrastructure, leading to the ironic endgame of the atemporal, wherein the illusion that society is separate from nature is both sustained by and projected upon the very metasystem which binds them inseparably together.

Secondly, because I’m increasingly convinced that an unexamined methodological positivism is at the root of solutionism and geek exceptionalism alike; it’s the dark side of scientific epistemology, a faux-empiricist position wherein that which cannot be quantified cannot exist. It’s also a central plank of neoclassical economics, and neoliberal political theory. Ironically, however, it has created the ultimate machine for forcing humans to confront the subjectivity of the human experience, namely the internet. This is the ideological paradox at the heart of atemporality: the more finely the metanarratives are shredded by our distrust, the more desperate we are for someone to stitch us together a comforting and authoritative story from the fragments. In such an environment, curatorship is power, as Rupert Murdoch knows very well; curation imposes a narrative on the fragments it collects together by excluding the ones it discards.

But what if you gave an exhibition and nobody came? Curation with no visitors is like art with no audience, a scream in the wilderness. So the complementary power to curation is that of distribution: the ability to not only shape the narrative, but to get it in front of the right audience.

He who owns the pipes controls the flow.