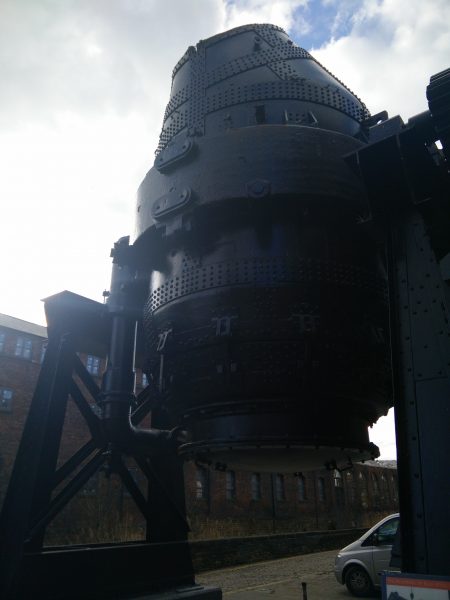 “For Laboria Cuboniks, the universal is synthetic – it’s a political category. It’s not something that is discovered, or progressively unearthed, but represents a ‘we’ that is collectively built, and which can be rebuilt in more emancipatory forms. Again, this can be understood as an effort to construct vectors of unanticipated and constructed solidarities. I see this as being in direct opposition to the bloated particularity that has conventionally been passed off as the universal and which has largely cornered the market on popular understandings of the generic since the Enlightenment. Xenofeminism doesn’t want to reject universality – though I totally understand the impetus – but instead wants to contest and re-engineer the universal.“

Helen Hester interviewed at The Quietus. I kinda missed xenofeminism the first time round, mired as I was in specifically thesis-pertinent theory at the time; looks like it would be well worth my addressing that oversight.

(And can I just say how good it is to see a music-and-culture organ like The Quietus covering theorists as if they were an important part of the culture? Because it is very good.)

In her overview of the political and economic dimensions of Iain M Banks’ fictional output for Lawyers, Guns & Money, Abigail Nussbaum makes this typically insightful aside:

This also brings us to our second reason for talking about the Culture in 2018, the fact that Amazon has recently announced the acquisition of the rights to the series, and is planning to make a miniseries of Consider Phlebas […] as someone who values Banks for the politics in his writing, it feels positively Black Mirror-esque for Amazon to try to use the Culture as yet another plank in its planned takeover of the world’s economy, the ultimate in how capitalism co-opts revolutionary ideas. That Jeff Bezos—who might have been a Banks-ian villain if he weren’t so depressingly ordinary—has called the sequence “a huge personal favorite” without any apparent sense of irony just feels like confirmation that Banks’s ideas are now completely beside the point.

This irony-free misparsing of science fiction is not unique to Bezos among the entrepreneurial titans of the Valley. Par example, in this interview from 2013, Elon Musk cites Douglas Adams’ Hitchhiker’s Guide as an inspiration:

“I guess when I was around 12 or 15…I had an existential crisis, and I was reading various books on trying to figure out the meaning of life and what does it all mean? It all seemed quite meaningless and then we happened to have some books by Nietzsche and Schopenhauer in the house, which you should not read at age 14 (laughter). It is bad, it’s really negative. So then I read Hitchhikers Guide to the Galaxy which is quite positive I think and it highlighted an important point which is that a lot of times the question is harder than the answer. And if you can properly phrase the question, then the answer is the easy part. So, to the degree that we can better understand the universe, then we can better know what questions to ask. Then whatever the question is that most approximates: what’s the meaning of life? That’s the question we can ultimately get closer to understanding. And so I thought to the degree that we can expand the scope and scale of consciousness and knowledge, then that would be a good thing.”

After a few readings, I’m not sure quite how many times the cart and the horse change places in that logic-pretzel; surely more times than are necessary to reach such a banal conclusion. But it is nonetheless totally beyond me as to how you could come to that conclusion after reading a series of books in which no plan is ever made that doesn’t go massively awry in a manner totally unforeseen by its progenitors, and which are ultimately about the ineluctable meaninglessness and absurdity of both the universe and our existence therein*. Wikipedia’s summary of the mid-section of Restaurant at the End of the Universe illustrates my point rather well, I think:

Ford and Arthur […] end up on a spacecraft full of the outcasts of the Golgafrinchan civilization. The ship crashes on prehistoric Earth; Ford and Arthur are stranded, and it becomes clear that the inept Golgafrinchans are the ancestors of modern humans, having displaced the Earth’s indigenous hominids. This has disrupted the Earth’s programming so that when Ford and Arthur manage to extract the final readout from Arthur’s subconscious mind by pulling lettered tiles from a Scrabble set, it is “What do you get if you multiply six by nine?” Arthur then comments, “I’ve always said there was something fundamentally wrong with the universe.”

Just as Nussbaum easily sees Bezos as a sub-par Banks villain, Musk appears to me less inspired by Hitchhiker’s, and more a character discarded from early drafts of it for being that little bit too absurdly on-the-nose a satire of human hubris.

* – This is my blog, and the Intentional Fallacy can piss right off.

A commendable long essay by Iwan Rhys Morus at Aeon, which should perhaps be added to the list of works that have something to say about #solarpunk, even if it isn’t talking directly to that genre-complex: it’s in part a call for an understanding of “innovation” as a collective endeavour, rather than something individual entrepreneurs (might) do (when suitably incentivised). Definitely repays reading in full, but these were the moneyshot paragraphs for me:

We have been imagining the future of energy and the worlds it will generate for more than two centuries, and the cross-fertilisation between inventors and their literary counterparts continues to shape our imaginings, more often than not by invoking a pervasive individualism. It’s as if we struggle to get away from the notion that energy technologies have a single origin point and so these origins have to be located in specific individuals. Such individualism is often accompanied by the suggestion that only one fuel, be it hydrogen, wind or solar power, will dominate our futures, real or imaginary. Just as coal and steam powered the 19th century, or oil and electricity the 20th century, our stories about future fuels assume that one principal form of energy – solar, wind, nuclear – will monopolise the future. too.

If we want to overcome these imaginative limitations, we need to rethink the sorts of stories and histories we tell about energy, its origins, and its cultures. Though we’re conditioned to see energy revolutions coming about through individual rather than community action, the danger of this narrative – seductive and potentially useful as it is – is that it presents the future and its energies as belonging to someone else. To overcome that, we need to recognise that the expertise needed to make sure that the future is powered how we want is collective.

Here Morus seems to be working in a space where my obsession with the persistently heroic nature of innovation narratives collides with my interest in using narrative writing (and in particular the tropes and tools developed for, but no longer exclusive to, science fiction literature) as a practical and interdisciplinary method for exploring and critiquing potential sociotechnical futures, whether of energy or anything else [external link to an academic paper, but it’s open access, so anyone can read it].

As an almost-but-not-quite postdoc, I’m frequently asked “what is your discipline?”, to which my usual response is “I’m not sure what it’s called, as it appears to be a discipline containing only one scholar, but I can describe it if you’ve got ten minutes to spare”; this piece points at pretty much the space where it resides, though I’m probably coming at it from somewhat more of a bastardised and interdisciplinary STS/sociological perspective than is Morus, who is a proper historian.

(Of related interest would be Karen Pinkus’s Fuel: a Speculative Dictionary, which I reviewed for New Scientist a while back.)

It mat not have been appreciated as such by the readership, but one of the great personal coups of my editorship of Futurismic was persuading the redoubtable Adam Roberts to provide a series of his reviews of imaginary books* for the site (which is, a little surprisingly, still online, despite its original founder reclaiming the domain name from me a little while ago.). The review-of-an-imagined-text is a genre of writing that lets Roberts do Roberts in a very concise format, and one is never quite sure whether he’s simply burning off fiction ideas that weren’t worthy of being developed at greater length, cocking a snook at the conventions and peccadilloes of genre fiction in general, or lampooning reviewing as both a genre of writing and a literary enterprise; it may well be all three at once, or perhaps none of them. You can decide for yourself, as today’s installment of the protracted Pornokitsch swansong** is a batch of said reviews, which I commend unto you.

(They’ve billed them as “imaginary reviews”, which slightly irks my taxonomic instincts: the reviews are not imaginary at all because, well, there they are; it’s the books they describe which are imagined! But that’s the sort of dancing-angel-counting that makes me an instinctive fan of Roberts’ writing, I suppose… and why I ended up writing an essay — for this book — that took the form of a review of an imaginary remix of one of Adam’s books, which ended up being nominated for an award for non-fiction writing, despite being on at least one level, if not more than one, completely fictional. Which is itself a rather Robertsean sort of irony.)

* – Not always books, actually; the final installment of The Adam Roberts Project was a rather excoriating review of an actually-existing album, namely Tarkus by Emerson, Lake & Palmer. It was one of the most-commented-upon pieces the site ever ran, due to its being discovered by a succession of ageing prog-rock fans whose humourlessness and petulance served only to validate every cliche about humourless and petulant prog rock fans.

** – I’m not entirely sure why the Pornokitsch crew have decided to wind their site down, beyond the post that explains they’d always stop when it stopped being fun, and that it had stopped being sufficiently fun. I suspect that things would be clearer were I still on social media, but I further suspect that their reasons for winding down are in some part similar to my reasons for quitting social media, and that Pornokitsch is yet another redoubt surrendered to the seemingly interminable genre fiction blog-wars. Sad to see them go, but I can’t say I blame them; as the old aphorism goes, there’s little point in wrestling with a pig, because you end up covered in filth and the pig enjoys it. Re-reading the comment thread beneath Adam’s review of Tarkus (linked above), I realise that I took a while to realise that myself.