The science fictional project is mainly a historical project, and to the extent there is any such thing as a futurological project, that would also be a historical project, so this isn’t a good distinction to try to make. I don’t think there are any valid futurisms or futurologies. I think most people who describe themselves as futurists or futurologists are claiming too much, almost to the point of being scam artists, especially if they charge people fees for them to come in and do consultations, as sometimes happens in the business world, or as a form of “edutainment”. Because the future can’t be predicted […] it’s best to leave all this at the level of science fiction, which for me is mainly a literary genre.

For me, science fiction has a kind of double action as a genre, and the image I use to convey this thought is the 3-D glasses you wear at 3-D movies to create the false impression of three dimensionality. Through one lens, sf tries to describe one possible future in great detail; not a prediction, but a modeling exercise or scenario. Not “this Will happen,” but “this Could happen.” Then the other lens is simply a metaphorical or symbolic portrayal of what’s going on right now. “It is as if we are all zombies being predated on by vampires”—this is my current candidate for the best metaphor for our times, even though people are too scared to write that one down, it seems. Anyway more traditional examples are “it is as if the working class are robots who may revolt,” or “it is as if cities are spaceships detached from Earth,” both older sf metaphors. Cyborgs are great images of us now, as Donna Haraway showed long ago. On it goes that way through that lens, symbolist prose poems of great power. Then, when the images coming through the two lens coalesce to a single vision in the mind’s eye, what pops into visibility is History itself, often deep time, casting into the future as well as back to the past. That’s how science fiction works and what it does.

Science fiction has been a marvelous escape from the dead end much “literary fiction” is in now, stirring the dead ashes of the great modernist works, and getting caught up in the narcissism of late capitalist bourgeois neurosis. SF is outsider art, looked down on by official literary culture, and that’s such a great place to be. It’s outside the MFA system, outside postmodernism, it’s even replacing the postmodern with the Anthropocene, historicizing and politicizing everything, able to take on science and use science’s exploding new vocabulary— well, there are many reasons why science fiction is the great realism of our time, and some of them are because of the traps it has avoided, either by its own efforts or by others misunderstanding and rejecting it.

A few days back a colleague linked me to this editorial at Nature about the use of full narrative forms in critical/speculative foresight work, which they link back to the establishing work of Brian David Johnson, who was at Intel at the time but now splits his labour between Arizona State U, consulting, and a fellowship with “a visionary innovation company that’s focused on growth”.

That latter vector of Johnson’s current employment probably sums up most of the issues I had with soi disant “science fiction prototyping” (SFP): it was framed quite explicitly as a product/service visioning process, was virtually devoid of methodology (let alone rigour), and made absolutely nothing of the critical potential of science fiction’s narrative toolkit. As such, it really didn’t stand too apart from long-established design paradigms, except for perhaps being a bit more honest about the “making stuff up and seeing where you might profitably take the ideas” aspect. My frustration with this rather shallow engagement with the potential of the narrative tools specific to science fiction has informed much of my academic work right from the start, arguably beginning with my first solo paper (Raven, 2014).

The Nature editorial largely rotates around a more recent paper in Futures (Merrie et al, 2018) in which the authors have taken the SFP idea and

… applied it to a topical environmental concern: the fate of the world’s oceans. The project paints four scenarios for 2050–70, each of which builds on current trends in oceans governance and the fishing industry, as well as ongoing development of marine science and technology. More-uncertain outcomes — the possible collapse of ice sheets and the formation of deep-sea dead zones as a result of onshore pollution — play out differently for better and worse.

In other words, they’ve balanced out the speculative/imaginative aspect of science fiction with the critical/contraPanglossian side — and it was extremely gratifying to find another of my papers (Raven & Elahi 2015) cited in their literature review, because frankly it’s felt like I’ve been beating my head against a brick wall on this stuff, at least as far as the mainstream futures scene is concerned (which, like BDJ’s employers, maintains an uncritical worship of the suitcase word “innovation”, and is focussed on delivering growth — or at least the immediately plausible prospect thereof — to corporate clients).

Narrative has an important role in the communication of science, but can it also help in the pursuit of research? Purists may baulk, but stories already feature heavily, from the promised potential of work pitched in grant applications to the case studies of impact that funders increasingly ask for when projects finish. Climate-change science has long relied on emissions scenarios that diverge according to how future societies might behave. These rely not on extrapolation of current trends, but on imagined differences in, for example, whether nations come to cooperate or opt to pursue their own agendas. And climate-change policies are being planned on the basis of stories of future technology — carbon capture and negative-emissions equipment included — that many argue are pure fiction and will never materialize.

It’s a huge relief to see that said in such a well-known and well-read scientific organ, and not just for the sake of self-aggrandizement: I’ve been pushing those ideas for five or six years, but many others have been pushing them for at least twice as long, and it feels like all that effort might finally be paying off.

Solutionism, it turns out, is not exclusive to Silicon Valley — though I suspect that the Valley’s financial and political clout are complicit in its mainstreaming throughout the global policy scene, as well as the science and engineering ends of the academy (which, in the UK at least, have slowly been drawn into the gravity well of bloated full-service consultancy-and-outsourcing parasites like Carillion and its ilk). But also complicit are the Panglossian flatteries of corporate foresight consulting practices: after all, if you don’t tell them what they want to hear, you probably don’t get invited back to next year’s “visioning retreat”. It’s investor storytime all the way down.

But the cracks in that metanarrative are starting to show… which is all the more reason to keep chiseling.

… the cities of the future won’t be “smart,” or well-engineered, cleverly designed, just, clean, fair, green, sustainable, safe, healthy, affordable, or resilient. They won’t have any particularly higher ethical values of liberty, equality, or fraternity, either. The future smart city will be the internet, the mobile cloud, and a lot of weird paste-on gadgetry, deployed by City Hall, mostly for the sake of making towns more attractive to capital.

Whenever that’s done right, it will increase the soft power of the more alert and ambitious towns and make the mayors look more electable. When it’s done wrong, it’ll much resemble the ragged downsides of the previous waves of urban innovation, such as railways, electrification, freeways, and oil pipelines. There will also be a host of boozy side effects and toxic blowback that even the wisest urban planner could never possibly expect.

Chairman Bruce at The Atlantic.

I think of the Gartner Hype Cycle as a Hero’s Journey for technologies. And just like the hero’s journey, the Hype Cycle is a compelling narrative structure. When we consider many of the technologies in use today, we tend to recall that they were overhyped when they first arrived, but eventually found their way to mainstream usage. But … is that really how technologies emerge and gain adoption? After analyzing every Gartner Hype Cycle for Emerging Technology from 2000 to 2016 – all seventeen years of the post dotcom era – I’ve come to believe that the median technology doesn’t obey the Hype Cycle. We only think it does because when we recollect how technologies emerge, we’re subject to cognitive biases that distort our recollection of the past…

I normally wouldn’t link out to L*nkedIn, but on this occasion it’s worth it: a bona fide hi-tech vencap who, after crunching the actual data, reveals that technology forecasting is about as scientific as cosmic ordering, and arguably even less effective.

Not at all incidentally, the Hero’s Journey is ubiquitous in the narratives of innovation studies and corporate foresight, and dominates the discourse in sociotechnical systems research. To quote briefly from my (very nearly finished) thesis, on the matter of the innovation model known as the Multi-Level Perspective:

… the MLP is, in effect, a generic story-form that relies on pre-established permutations of certain archetypal characters, set-
tings and events. Much as with an airport thriller novel or superhero movie, you always end up with the same basic arc of plot: in the case of the MLP, that generic story is known as “transition”, and it follows the journey of a hopeful young innovation on its adventures through the sociotechnical landscape, struggling against the incumbent regime until it finally achieves the “market dominance” which was its destiny and birthright.

In other words, every new gadget is Frodo, setting out to disrupt the oppressive sociotechnical hegemon of Sauron. The corollary is that every “change agent” and “innovator” sees themselves as bloody Gandalf. 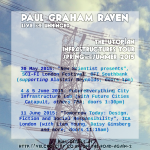