In her overview of the political and economic dimensions of Iain M Banks’ fictional output for Lawyers, Guns & Money, Abigail Nussbaum makes this typically insightful aside:

This also brings us to our second reason for talking about the Culture in 2018, the fact that Amazon has recently announced the acquisition of the rights to the series, and is planning to make a miniseries of Consider Phlebas […] as someone who values Banks for the politics in his writing, it feels positively Black Mirror-esque for Amazon to try to use the Culture as yet another plank in its planned takeover of the world’s economy, the ultimate in how capitalism co-opts revolutionary ideas. That Jeff Bezos—who might have been a Banks-ian villain if he weren’t so depressingly ordinary—has called the sequence “a huge personal favorite” without any apparent sense of irony just feels like confirmation that Banks’s ideas are now completely beside the point.

This irony-free misparsing of science fiction is not unique to Bezos among the entrepreneurial titans of the Valley. Par example, in this interview from 2013, Elon Musk cites Douglas Adams’ Hitchhiker’s Guide as an inspiration:

“I guess when I was around 12 or 15…I had an existential crisis, and I was reading various books on trying to figure out the meaning of life and what does it all mean? It all seemed quite meaningless and then we happened to have some books by Nietzsche and Schopenhauer in the house, which you should not read at age 14 (laughter). It is bad, it’s really negative. So then I read Hitchhikers Guide to the Galaxy which is quite positive I think and it highlighted an important point which is that a lot of times the question is harder than the answer. And if you can properly phrase the question, then the answer is the easy part. So, to the degree that we can better understand the universe, then we can better know what questions to ask. Then whatever the question is that most approximates: what’s the meaning of life? That’s the question we can ultimately get closer to understanding. And so I thought to the degree that we can expand the scope and scale of consciousness and knowledge, then that would be a good thing.”

After a few readings, I’m not sure quite how many times the cart and the horse change places in that logic-pretzel; surely more times than are necessary to reach such a banal conclusion. But it is nonetheless totally beyond me as to how you could come to that conclusion after reading a series of books in which no plan is ever made that doesn’t go massively awry in a manner totally unforeseen by its progenitors, and which are ultimately about the ineluctable meaninglessness and absurdity of both the universe and our existence therein*. Wikipedia’s summary of the mid-section of Restaurant at the End of the Universe illustrates my point rather well, I think:

Ford and Arthur […] end up on a spacecraft full of the outcasts of the Golgafrinchan civilization. The ship crashes on prehistoric Earth; Ford and Arthur are stranded, and it becomes clear that the inept Golgafrinchans are the ancestors of modern humans, having displaced the Earth’s indigenous hominids. This has disrupted the Earth’s programming so that when Ford and Arthur manage to extract the final readout from Arthur’s subconscious mind by pulling lettered tiles from a Scrabble set, it is “What do you get if you multiply six by nine?” Arthur then comments, “I’ve always said there was something fundamentally wrong with the universe.”

Just as Nussbaum easily sees Bezos as a sub-par Banks villain, Musk appears to me less inspired by Hitchhiker’s, and more a character discarded from early drafts of it for being that little bit too absurdly on-the-nose a satire of human hubris.

* – This is my blog, and the Intentional Fallacy can piss right off.

The science fictional project is mainly a historical project, and to the extent there is any such thing as a futurological project, that would also be a historical project, so this isn’t a good distinction to try to make. I don’t think there are any valid futurisms or futurologies. I think most people who describe themselves as futurists or futurologists are claiming too much, almost to the point of being scam artists, especially if they charge people fees for them to come in and do consultations, as sometimes happens in the business world, or as a form of “edutainment”. Because the future can’t be predicted […] it’s best to leave all this at the level of science fiction, which for me is mainly a literary genre.

For me, science fiction has a kind of double action as a genre, and the image I use to convey this thought is the 3-D glasses you wear at 3-D movies to create the false impression of three dimensionality. Through one lens, sf tries to describe one possible future in great detail; not a prediction, but a modeling exercise or scenario. Not “this Will happen,” but “this Could happen.” Then the other lens is simply a metaphorical or symbolic portrayal of what’s going on right now. “It is as if we are all zombies being predated on by vampires”—this is my current candidate for the best metaphor for our times, even though people are too scared to write that one down, it seems. Anyway more traditional examples are “it is as if the working class are robots who may revolt,” or “it is as if cities are spaceships detached from Earth,” both older sf metaphors. Cyborgs are great images of us now, as Donna Haraway showed long ago. On it goes that way through that lens, symbolist prose poems of great power. Then, when the images coming through the two lens coalesce to a single vision in the mind’s eye, what pops into visibility is History itself, often deep time, casting into the future as well as back to the past. That’s how science fiction works and what it does.

Science fiction has been a marvelous escape from the dead end much “literary fiction” is in now, stirring the dead ashes of the great modernist works, and getting caught up in the narcissism of late capitalist bourgeois neurosis. SF is outsider art, looked down on by official literary culture, and that’s such a great place to be. It’s outside the MFA system, outside postmodernism, it’s even replacing the postmodern with the Anthropocene, historicizing and politicizing everything, able to take on science and use science’s exploding new vocabulary— well, there are many reasons why science fiction is the great realism of our time, and some of them are because of the traps it has avoided, either by its own efforts or by others misunderstanding and rejecting it. 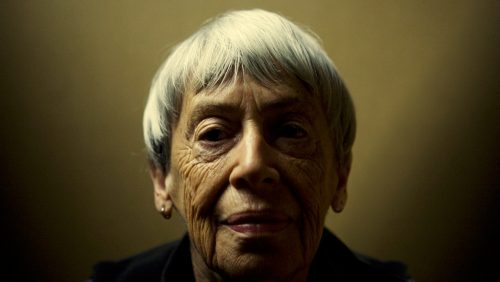 From all of us who are trying to walk away from Omelas: go easy, Starbear. We promise to continue the work.

Of course, if you really need to blame someone, look no further than those naysayers over in the corner; they’re the ones who didn’t Dream Big enough, after all. They’re the ones who failed to Inspire the rest of us. Don’t blame us when the boulder squashes you flat; blame them, for “making us all fear technology”. Blame them, for failing to “show an array of trajectories out of the gloomy toilet bowl we’re spiraling”.

In fact, why wait until the boulder actually hits?

Blame them now, and avoid the rush.

Peter Watts doing what he does best; worth reading in full.

If sci-fi convincingly simulates another world, it gives the reader ways of imagining our world otherwise. Science fiction is more, not less, “realist” than literary fiction. It does not produce the fiction of a severed part of a world, as if the rest was predictable from the part. It produces a fiction of a whole different world as real.