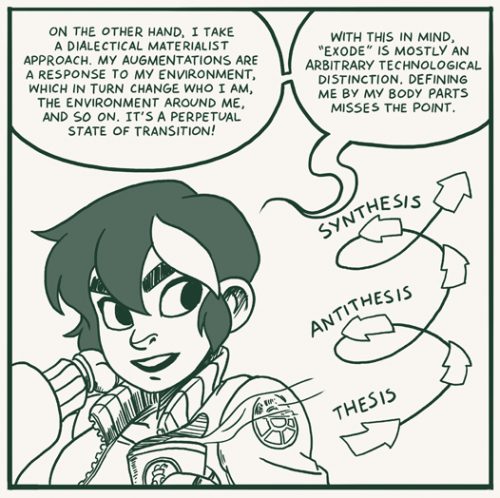 Dresden Codak. Started following his original webcomic way way back in the Noughties, when it was just as much of a one-person labour of love as it is now (though the artwork has gone from good to astonishing over the years).

Back then DC (and I, for my sins) were fellow-travellers of transhumanism; DC is, I suspect (on the basis of my reading of their work, rather than any direct knowledge), still a smidgen closer to that scene than I am these days, but the Dark Science series (go read some) has been steadily developing what feels like a much more posthumanist position — an understanding of the cyborg as a (sociotechnopolitical) metaphor, in other words, rather than the naive concretised misparsings of sf images so fetishized by the transhumanoids. This panel seems to confirm that feeling quite bluntly, at the same time as it resonates with stuff I’ve been discussing over the last few weeks*. Plus I thought maybe it was time I posted something that wasn’t just words.

* Things have been quiet because I’ve been in Sweden for close to three weeks, a “visiting scholar” set-up that is now drawing to a close. It’s been insanely busy and tiring, but very much in the positive sense.