Yesterday afternoon, the ever-lovely @littlemoog dropped me a line to see if I fancied catching a screening of the classic silent movie Nosferatu at the Prince Charles Cinema, just off Leicester Square. We’d discovered the Charlie a few weeks back, thanks to Sophie Meyer – tutor of the just-about-finished Short Form module of my Masters – suggesting that we all go and see Silent Running as an end-of-semester class outing*. The Charlie is primarily a “second-run” theatre, specialising in screenings of cult movies with an assortment of twists on the usual sit-down-and-shut-up format; their sing-along-a-screenings seem to be consistently popular, for instance. The main screen has comfy seats with a lot of leg-room, and the prices are generally pretty decent too. 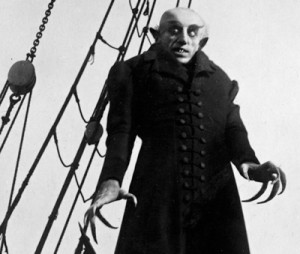 Sing-along-a-Nosferatu wouldn’t work, of course, given that it’s a classic of the silent era. But what we got was even better: the film was accompanied by a soundtrack performed live by post-rock outfit Minima. Apparently this isn’t an entirely new phenomenon – the guys from Minima told me they’ve been doing similar stuff since the mid-Noughties – but it was a new experience for me, and one I’ll definitely be looking to repeat. For a start, the traditional tones of post-rock – effected and echo-drenched guitar for melody and texture-drones; effected cello and electric bass; untreated drumkit – are eminently suited to soundtrack work (witness the only-now-fading ubiquity of Sigur Rós tunes in nature documentaries, for instance). But rather than kludging existing tunes to fit the film, Minima have developed their soundtrack from the ground up, fitting everything neatly to the happenings on screen, bringing the scenes to life. Much of the magic comes from their willingness to have fun at the right moments… I won’t spoil it for you, but the scene in which the disguised Count gives Hutter a ride to the castle on his funereal carriage was LOLtastic.

I’d never seen Nosferatu before, though I was vaguely familiar with it thanks to countless riffs and references to it in other media. Given it was made in 1922, I was impressed by its cinematic maturity… or perhaps surprised at how many film-making techniques and strategies have persisted over that ninety year period (I often describe myself as “cinematically challenged”; I’ve always been more of a books person.). The visual atmosphere is what will stay with me the longest, I suspect: the bleak and lonely locations, especially. The shot near the end with the coffins being carried down the main street of the town during the plague was very affecting… though that may be partly due to the contrast with the rambunctious chase-scene that follows it.

All in all, a great evening out, and I’m very glad @littlemoog dragged me out of my garret for it. If you’re London based and love classic movies, you could do far worse than keep a close eye on the Charlie’s listings page. And if you get the opportunity to see Minima do one of their live soundtrack performances, you’d be mad to pass it up. All the best bits of a movie screening and a live gig in one package; A-double-plus recommend.

[ * Silent Running is an oddly charming little film, given the fundamental bleakness of its premise. Much like Nosferatu, it has moments of laugh-out-loud comedy, though I expect they were intended as such, whereas many of the comedic moments in Nosferatu are more a function of audience unfamiliarity with the ‘language’ of the silent film (e.g. exaggerated emotional face-pulling, slapsticky body-comedy). Here’s Al Reynolds on why Silent Running is one of his favourites. ]