Another day, another minor mention of immortalism in the mainstream media; this one’s rare in that it mentions the really important element of the business model of Alcor and other such cryogenics “service providers”:

The majority of patients choose to take out life insurance policies naming Alcor or the Cryonics Institute as their beneficiary.

Read that again. Let the implications sink in. Alcor’s business model involves encouraging people to bequeath a significant chunk of their estate against an ill-defined promise with little or no scientific foundations, to possibly be delivered upon at an indeterminate date in the future.

If it were only wealthy SilVal vencaps and other powerbros who were foolish enough to quaff this particular flavour of snake-oil, I’d have few tears to shed; any successful con-artist knows that the greedy and vain are the easiest targets to take. But the desperate are also easy targets, and quackery is always drawn to the scent of sickrooms; it takes a very special sort of grasping scumbag to bottle your hopes and sell them back to you.

I try to speak to Max More, but no interview is forthcoming despite several emails and calls.

The mightily monikered More is wise enough to not submit to interviews which are likely to not picture Alcor in its best light — and what astute businessman would do otherwise? But we need not be left guessing as to the flavours of philosophy that most made their mark on More during his stint reading PPE at Oxford, as his website burgeons with enlightening screeds that offer an insight into the man behind the elaborate self-made myth. I recommend starting with the soi-disant Proactionary Principle, which is also a cornerstone of transhumanist doctrine. Here’s a wee taster:

Whereas the precautionary principle is often used to take an absolutist stand against an activity, the Proactionary Principle allows for handling mixed effects through compensation and remediation instead of prohibition.

The core project of capital-T Transhumanism is only ostensibly about life extension and immortality; its true purpose is as a glossy conceptual package of future-glossed vanity-bait designed to encourage wealthy spoiled assholes to argue for massive programs of further economic and industrial deregulation. And while I’m not greatly fussed about the fates of fools who’d fall for this, the ultimate suit of emperor’s new clothes, I retain the same healthy respect for its tailor that I reserve for another species equipped with a forked tongue.  To paraphrase another libertarian fantasist:

People will believe anything you tell them, provided they want it to be true, or fear that it already is.

To observe that this is true is pessimism; to monetise it is cynicism, pure and simple.

The network is neither good, nor bad, and never neutral; instead, the repetition of national politics in virtual space reminds us that our digital lives take place in the context of history and society, subject to the same powers and pressures as our physical lives. The network can be occupied, controlled, forbidden and attacked in just the same way as any other territory. But unlike other territories, its nature is to reveal its workings to the curious enquirer, to state its nature, and make itself amenable to investigation and change. What was not visible is written down, if we understand how to read it. By following the network, it’s possible to illuminate other narratives of history and politics, ones which have not been seen and told so clearly before, and may point the way to other futures.

Last weekend I was a guest at Brown University, Providence, appearing as a panelist at Jo Guldi’s Land & Water conference, a conclave of academics and activists with a mutual interest in the historical forces mediating our access to the environment and its resources. There should be more material to come at the link above, including session videos (which may well allow you to see what happens when yours truly decides to ditch his prepared remarks about five minutes before speaking, and freewheels off on a different angle entirely).

In the meantime, here are some links relating to things that came up along the way (or during the same period, at least), because linking stuff was what weblogs used to be all about, you know, and it was all fields round here when I started out, far as the eye could see, and if you tell young people that, well, they won’t believe you… [wanders off into distance, muttering to self]

I’m toying with reviving my old link-dump practice, partly as a back-to-blogging-regular hack, partly as a way of keeping track of these damn things on a platform where I retain control. We’ll see how that works out… right now, deadlines are something of a priority, but I do love to procrastinate…

… narrative is the specific form taken by a written history to counter the permanence of vision. […] Narrative asserts the the power of men [sic] to be born, develop, and die, the tendency of institutions to change, the likelihood that modernity and contemporaneity will finally overtake “classical” civilisations; above all, it asserts that the domination of reality by vision is no more than a will to power, a will to truth and interpretation, and not an objective condition of history. Narrative, in short, introduces an opposing point of view, perspective, consciousness to the unitary web of vision; it violates the serene Apollonian fictions asserted by vision.

My career as a musician never really got anywhere, but that doesn’t mean I don’t end up touring… 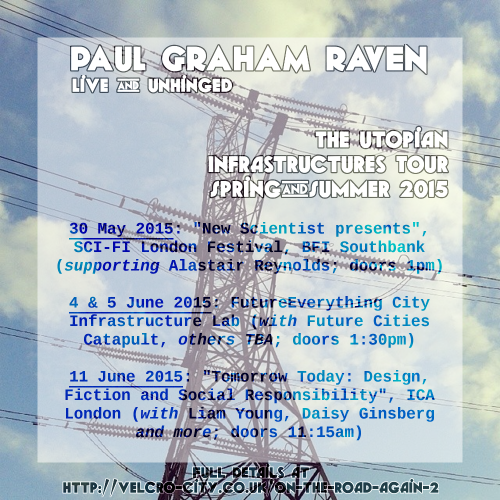