Here’s a great opening ‘graph for a seasonal cyberpunk satire:

“I heard my first Christmas music of the year in District 1. It was the 1st of August, 27ºC outside and All I Want For Christmas was drifting out of a market stall dedicated to selling Santa hats.”

Only it’s not from a piece of fiction at all; it’s from the first installment of @iamdanw’s account of his travels across China with the Unknown Fields expedition. Having talked to others who were on the same adventure, the megamarket of Yiwu is likely the least weird part of the story.

So yesterday I was at the Birmingham School of Architecture, playing guest reviewer for Masters-student group and individual project-work for one of the four school “studios”. Reason I got the invite is that Mike Dring and Rob Annable are apparently both fans of my Infrastructure Fiction talk, which they’ve included in their studio syllabus; the current crop of projects includes the creation of infrastructure fictions as part of the process. This is really fascinating for me, given IF was (deliberately) a pretty formless manifesto; seeing people pick it up and do stuff with it is really cool, especially when they do things with it that I’d never have thought of.

(Lordy, but do they wring a lot of deliverables out of architecture students, though — I though my creative writing Masters came with a heavy list of outputs, but it looks like sheer dilettantism by comparison to what these kids are up to.)

On the subject of infrastructure and narrative, this Rebecca Solnit bit for the NYT [via @debcha] seems pertinent to both the above, and to the times in general. Some quotes:

“To grasp climate change, you have to think in terms of species and their future. To know how things have already changed, you have to remember how they used to be, and so you may not notice birds disappearing from the skies, or hotter weather or more extreme storms and forest fires. You need to look past the sparrow and see the whole system that allows — or allowed — the birds to flourish. The swallows, the chinook salmon, desert tortoises, manatees, moose and us. Addressing climate means fixing the way we produce energy. But maybe it also means addressing the problems with the way we produce stories.

And so we should seek out new kinds of stories — stories that make us more alarmed about our conventional energy sources than the alternatives, that provide context, that show us the future as well as the past, that make us see past the death of a sparrow or a swallow to the systems of survival for whole species and the nature of the planet we leave to the future.”

That’s a very infrastructure-fictional call-to-arms, there — I’ll bet the architecture students I saw yesterday would recognise it as one, at any rate.

“The purpose of studying economics is not to acquire a set of ready-made answers to economic questions, but to learn how to avoid being deceived by economists.” — Joan Robinson [seen at Teh Graun]

Folklore and infrastructure intersecting, with a hint of Haraway, in this interview with the gloriously-named internet folklorist Trevor J Blank:

Because technologically-mediated communication is so ubiquitously and integrally rooted into everyday life (for most individuals), the cognitive boundaries between the corporeal and virtual have been blurred. When we send text messages to a friend or family member, we typically think “I’m sending this text” instead of “these glowing dots of phosphorous are being converted into tiny signals and beamed across several cell towers before being decoded and received on a peer’s phone.” The message is perceived as an authentic extension of our communicative selves without much thought over the medium in which it was sent.

And another snip from the second part of the interview:

Fundamentally, we rely on institutions for a number of aspects of everyday life: we look to our government to protect us and keep us moving forward as a society; we expect children to learn something valuable when they go to school; we look for law enforcement to ensure that citizens play by the rules, just to name a few. Folk culture–the informal, unofficial expressive dynamics that constitute everyday life within a group–resides outside of these institutions yet it is inherently aware of and shaped by them. The two unavoidably intermingle in the context of modern American life. For instance, connecting to the Internet requires navigating through an institutional barrier, like a cable company or Internet service provider, before one can even begin to engage in vernacular expression online.

To follow that thread, dynamic folk discourse can take place in the comment sections of institutional websites like YouTube. Or, an individual can publish beautiful, original prose (essentially folk expression) on their blog, which may have been built from a template provided by WordPress (which is institutional). The point is that folk expression and institutions are not inherently antagonistic; in fact, they frequently play off one another or become hybridized in the process of generating folklore.

Neatly kicks Digital Dualism in the nuts… and provides both a context for and excuse to copy and repost this image, which — for the sake of good archival practice in spite of the phenomenon of link-rot — came from here: 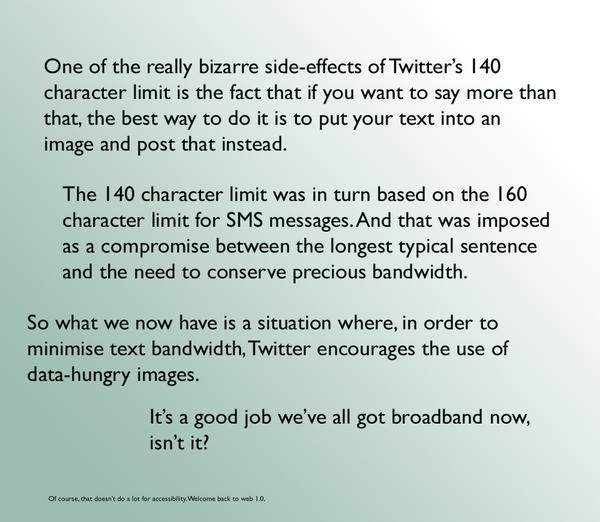 Now, what you’ve got there is not only a shift in interface devices influencing the practices and use-customs that ride upon an infrastructure, but the modality and demand-pattern of that usage influencing the expansion of capacity of the infrastructure itself. And while this isn’t an example I can use easily, that’s precisely what my PhD is all about…

I get published, y’know.

Now, I announced the release of the Noir anthology from Newcon Press aaaages ago, but the world of reviewing moves pretty slowly when it happens off-line, and only now has this incredibly flattering write-up of my story “A Boardinghouse Heart” made it onto the hallowed pages of Vector, courtesy of the mighty Martin McGrath (who is not know for cutting crap fiction any slack, I might add). Quoth McGrath, the story:

“… is very fine indeed — compact, dense and intelligent, it is more-or-less everything I’d hoped for when I picked up the collection. It’s a detective story — or at least it’s a story with a detective in it — set on the slippery streets of a richly realised city. The protagonist, as should be the case in all good noir stories, is hopelessly out of his depth and beset by those more powerful and cleverer than he is. The most effective element is the way in which the story immerses you in a city, gives it history and heft, yet never burdens the reader with hefty exposition. I also liked its refusal of any heroic narrative. It’s a fine achievement and worth the price of admission on its own.”

That price of admission is £2.01 as a Kindle ebook, and rather more for paperback or hardback (signed) versions, should you be tempted by this effusive praise.

There have been few reviews of the Twelve Tomorrows anthology, possibly because MIT Tech Review took a somewhat “fire and forget” approach to promoting it, but the October print edition of Locus picked it up in two separate columns, in one of which Gardner Dozois declares:

“[t]he best stories here are Lauren Beukes’s “Slipping” and Paul Graham Raven’s ”Los Piratas del Mar de Plastico (Pirates of the Plastic Ocean)”, both of which manage to inject human drama into their visions of the future, as well as characters you care about who are faced with situations where they have something and something significant at stake.”

Which is a fairly writer’s-workshop-y kind of compliment, perhaps, but it comes from a man who’s been in the anthology editing game for almost as long as I’ve been alive, so I’m gonna go right ahead and take him at his word. Twelve Tomorrows also available in ebook form for UK readers via everyone’s favourite rapacious and riparian online retailer, for a mere £5.99. A steal, really, when you see who else is in there alongside me.

Last but not least, albeit considerably less glamorous, here’s an article I wrote for Water & Wastewater Treatment Magazine about Pipedreams, one of the big meta-projects of the Pennine Water Group, wherein I am currently embedded as a postgraduate researcher. Even though I struggle to explain my own research concisely, I can at least explain that of my colleagues, wot?